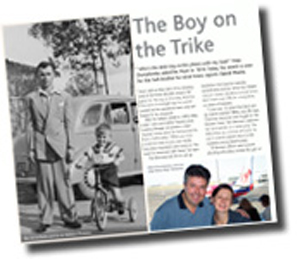 The Boy on the Trike

“Who’s the little boy in the photo with my Dad?” He asked his Mum in 1974. Today, his search is over for the half-brother he never knew, reports David Morris.

Tears well as Mike tells of his amazing search for three decades around the globe for the boy on the trike, Nicholas. A fortnight ago his search ended, but his questions have only just begun to be answered. After his father’s death in 1974, Mike, sister June and mother Vassilia were looking through old photos in their Sydney home when he first learned he had a half-brother. “When you lose someone close to you, your family becomes important, even more so. You want to reconnect with them,” he says.

The discovery led him to set up Australia’s first reunion website, www.reunion.com.au”, which has helped many in similar situations to track down their loved ones. Still, for a long time, no news of Nicholas.

“I was only 14 when Dad died and my search started,” Mike, now 45, says. “Dad was Ukrainian and fought on the Russian Front. The Germans captured him and put him in a work party. The Allies blew up a convoy of trucks he was in and he played dead on the roadside among dead bodies. “A German officer went around shooting all bodies, cocked the gun at Dad but didn’t shoot. He escaped and went to Austria. “During the War he met Natasha in Austria; they had a son Nicholas in 1946. They lived together for four or five years; Dad immigrated to Australia on his own,” Mike explains.

Ilija Doroschenko (Mike later dropped the ‘c’ by deed poll) went to Sydney and around 1952 Mike’s half-brother and his mother followed. They met Ilija in Sydney and that’s when the photo was taken. “I saw the photo and asked my sister and Mum,” Mike says. Back then families kept past secrets. My Dad took all of that to his grave. Once he’d gone my mother was more open. She died two years ago. “Mum wasn’t sure about Nicholas’ mother’s surname.”

Ilija and Natasha again separated for reasons unknown. Ilija met Mike’s mother in 1955 and married in ’56; June was born in 1958 and Mike in 1961. “I’ve only got good memories of Dad walking in his favourite park, Sydney’s Royal Botanical Gardens and taking me to the Sydney Opera House opening in 1973. It makes me cry when I see footage of it, remembering I was there with Dad.”

Mike’s search for Nicholas began. He wrote letters to Doroschenko’s in Australia, then all over the world. “After the internet started, in the mid ’90s I searched for anything to do with Doroschenko. On websites I posted the photo with, ‘Who is this little boy, help me find my brother’. “I started getting emails from researchers in Europe saying, ‘Did you know your family is part of a distinguished family in Europe and you have royal blood in you?’ Two Doroschenko’s were ruling Hetman (Tsars) in the 1600s, Cossack leaders; one united tribes to bring the Ukraine together as one. I found interesting stuff but not on my brother. I started to think he was not in the country or had long gone. I had lost hope… ”

In 2000 Mike launched the website Oz Reunion and it swelled year after year as searchers kept giving him information to post. “I knew many were out there looking for missing persons, lost contacts, adoptions, lost loves, descendants and school reunions amongst others,” he says. “It became a popular site and grew immensely. I started getting success stories of people who had found loved ones through the site. It motivated me to keep searching for Nicholas.”

Through Google, Katy from Melbourne had visited Oz Reunion – her father had told her that his family name was really Doroschenko – and she saw Mike’s listing searching for his half-brother. She was amazed someone was looking for her father. Sadly, he had died three years earlier.

“My heart sank when I got this email from this lady,” Mike says. “It was a release after searching so long for answers. I responded anonymously as administrator of the website at first, with caution because she was the first person to respond to my listing in six years,” Mike says. The clincher was a photo Katy sent of the little boy on the tricycle in a different angle; no one could have known the details, I broke down in tears. It’s an amazing feeling after so long to know your search is over.”

Amazingly, Mike and his wife Toni have a daughter Katie and confirmation of the photo happened on her 10th birthday. They also have a son called Elija.

“(Niece) Katy was shocked and very happy that she’d found me, so we had a couple of telephone conversations and lots of tears.” A reunion took place in Sydney last month. “I have told Katy I would really like to get to know who her Dad was, to find out what he was like. (Learning of his death) was like losing another relative and was very difficult for me. “It’s good to find answers; it’s sad that he died without me being able to meet him, but it all happens for a reason.”

Mike will continue the website www.reunion.com.au. “Thousands are out there searching for loved ones. I want to give hope that they can find answers. The website works, I’m proof of that.”